Instructional Video is now up!

We’ve finally made an instructional video for the GrowlTap. It was a lot of fun and the company that shot it did a fantastic job. However I don’t think they realized that there would be tons of beer to drink or let go to waste. Here’s a picture of me and the camera man Jared. 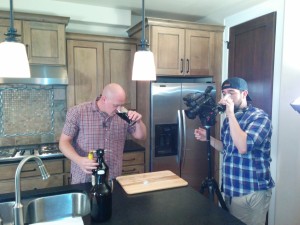 A very big thank you to my friend JT for letting us use his kitchen. Also thanks to The Brews on Broadway in Englewood Colorado for allowing us to shoot a bit of it in their brewery. Right now it is my favorite brewery in Colorado. I don’t ge tin as much as I would like but every time I visit the head brewer, Paul Webster has an amazing new recipe that he’s working on. Their Cinderella Double IPA has been my consistent favorite. Check it out if you’re ever in south Denver!